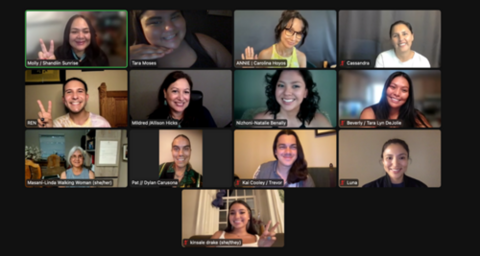 Monday May 16th, YIPAP presented a reading of “Built on Bones” by Tomas Endter (one of the winners of this year’s Young Native Playwrights Contest). Built on Bones was directed by Daniel Leeman Smith and featured performances by: Sera Lys McCarthur, Skyler Davis, Candice Byrd, Lea McCormick, Michael Pantozzi, Shamus McCarty, and Samantha Shaw. It was dramaturged by Blossom Johnson.

We closed out the 2022 YIPAP Festival with a reading of “As It Has Always Been” by Kinsale Drake, one of the winners of this year’s Yale Young Native Playwrights Contest. Kinsale has been one of the students most involved with YIPAP during her time at Yale, and even before she came to Yale, she was involved with YIPAP when she won the Yale Young Storyteller’s Contest for her Poetry in 2016. It was incredibly exciting to close out this year’s festival with her play “As It Has Always Been,” which was directed by Tara Moses, and dramaturged by Adrian Centeno. The play was performed by: Natalie Benally, Ryffin Phoenix, Trevor McChristian, Kenny Ramos, Hermelinda Walking Woman, Tara Lyn Dejolie, Shawna Sunrise, Dylan Carusona, Allison Hicks, Jennifer Bobiwash, Carolina Hoyos, and Mara Guiterrez.

“I am so grateful we were able to bring all of these artists together this year to develop these plays, and celebrate Native Theater,” commented YIPAP Executive Director Madeline Sayet. “Every single one of these plays inspired, empowered, and surprised audiences with their nuanced characters and journeys. The Native Theatre community is so strong even while confined to working on zoom. I look forward to the time we can finally bring all these incredible Native artists to Yale’s campus in the future and welcome them properly.”

We will begin accepting submissions for the 2023 Yale Young Native Playwrights Contest this Fall.