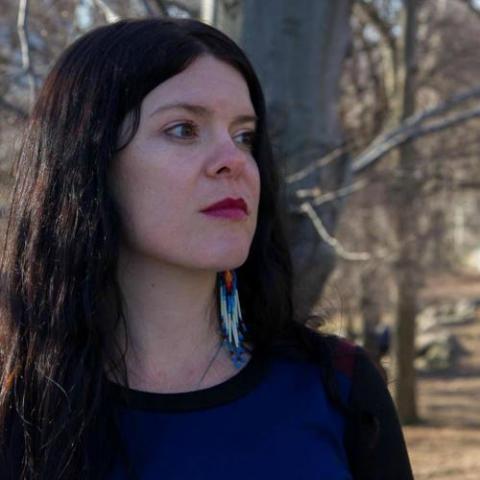 Playwright and lawyer Mary Kathryn Nagle has accepted an offer to become the founding Executive Director of Yale University’s Indigenous Performing Arts Program (YIPAP), a co-conceived project between YGSNA faculty, University administrators, and Native American Cultural Center members. This part-time position allows her to work at Yale on a consistent basis. Starting in Fall 2015, Nagle will return to Yale to coordinate student-led performing arts projects, including the September 15th showing of her co-created play, My Father’s Bones.  Co-created with Suzan Harjo, this play examines the decades-long struggle of the Sac and Fox Nation of Oklahoma to return the remains of Jim Thorpe to his family cemetery on Sac and Fox soil.  For Nagle, this is her second play performed at Yale, following last Spring’s historic production of Sliver of a Full Moon, at the Yale Law School.

AMERINDA produced Nagle’s play Miss Lead as an equity showcase in January 2014 at 59e59 Theaters (New York).  Nagle was also a member of the Civilians’ Research and Development Group in 2013-2014, where she wrote her latest play, Fairly Traceable.  Her other plays include: In My Father’s Eyes, Sliver of a Full Moon (www.sliverofafullmoon.org), Diamonds … are a Boy’s Best Friend, and My Father’s Bones (a play she co-wrote with Suzan Shown Harjo).  Most recently she was commissioned by Arena Stage (Washington, D.C.).