Reshaping the World: A Mohegan Reaction to Madeline Sayet’s Where We Belong 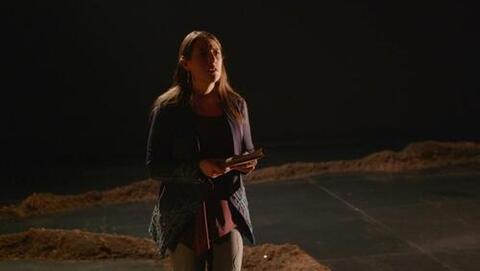 Finding Native representation in art and media when I was growing up was difficult. Finding anything good or specific? Nearly impossible. Imagine my joy at a piece of theater written by a Mohegan about Mohegan that uses Mohegan language, teachings, history, and cultural motifs—by another Maddy, no less!

The academic part of me knows how to break down its storytelling, to wax poetic about how it interweaves different themes, how it tells a story so often overlooked, how it brings forward a history that many would rather ignore. But the little Mohegan girl is just so happy to have a story to see herself in.

I see Where We Belong as primarily about balance and translation bound up together. As Sayet moves around the stage, traversing the shifting boundaries demarcated by lights and a winding trail of piled dirt with one small island of dirt in a bend, she embodies that delicate act that I, and I assume many other Indigenous people, go through in trying to find some place to stand that feels hospitable to us, that will accept the whole of us without demanding translation. That dirt design, which alternately represents artificially imposed borders and bodies of water, resembles the Mohegan trail of life design. In one scene, this earthen river is illuminated with another variation on the trail of life that we view from above.

Navajo costume designer Asa Benally (YSD ‘16) also incorporated the trail of life into Sayet’s outfit, with blue and white stitching on her jeans reminiscent both of a river and of the trail of life. Her jacket has blue patches like shards of sky or those artificial borders. The overall design of the costume, but especially the jacket, reminds me of Seneca artist Marie Watt’s blanket stories, one of which was recently displayed as part of the Places, Nations, Generations, Beings exhibit at the YUAG. This visual reference to the work of another contemporary Indigenous artist serves to remind the audience that this piece is in conversation with many community members, reinforcing a sense of interdependence. These echoes between the themes of the play found in the sets and costuming are just one of the ways that this show reminds us of the numerous threads being woven together throughout the piece.

The phrase “walking in two worlds” is frequently said of Native people, often by other Native people. I understand the feeling behind it: the distance between our worldview and the one that can’t seem to understand the urgent need to return our stolen relations feels untraversable. But in my experience, none of us are walking in two worlds. We walk in one terrifyingly, beautifully, inescapably interdependent world. Both different times and different worldviews, rather than being separate entities, layer upon one another, operating all at once. By pulling us through not only her own life but the lives of Mohegan ancestors and placing us herself—and therefore the audience—in dialogue with them, Sayet reminds us of this coextension of time. And it is the simultaneity of conflicting worldviews that forces us to navigate them seeking a place to stand.

Translation, and language itself, is the other topic that sticks with me from this piece. First, I appreciate it for what it asks of the non-Native viewer. Sayet challenges them to examine their assumptions and the conventions they take for granted. By foregrounding translation, both of language and of worldviews, throughout the piece, she emphasizes the fact that those views which we often take to be natural or neutral are not in fact so, but owe that status to a long and violent history of colonization. The viewer must ask themselves, as Sayet points out later in the show, what it means that her story is being presented in the language of her colonizer rather than her own, what it means to rob a people of the ability to speak their own stories. While Sayet tells us her story, some of its truth remains unspoken so long as it cannot be said—and heard—in Mohegan.

Sayet speaks about tripping over our own tongues and dreaming of a day when we don’t encounter that difficulty. I often come to a point in writing or speaking where there is something that I want to say but I simply cannot, because I do not have access to the language that would enable me to do so. I am slowly learning Mohegan, but sometimes I become so angry that there wasn’t a community of living speakers to pour the language and the worldview it contains into me from birth. The removal of our language deprived us not only of the words themselves, but of the relationships encoded in that language and our ability to maintain those relationships with one another and the land.

In discussing language loss and reclamation, Sayet reminds us that it is these relational languages that we need to repair the relationship of all humanity with the earth. The diminishment of Indigenous languages is an incalculable loss not only to those communities like mine, whose language has been sleeping for a long time making it all that much harder to rouse, but for those who landed on our shores lacking the sense of reciprocity one needs to have in order to survive with the land. There is no existence separate from the land, and our languages are able to express that in a way that the languages of our colonizers simply do not.

Perhaps the most exhausting translation is that between the worldview of the colonizer and the Indigenous worldview. I hear the beginning of Sayet’s journey as a fan and performer of Shakespeare to an academic who studies Shakespeare as an attempt to render herself legible to the dominant colonial power structure. Having done a great deal of this myself (though not with Shakespeare), her sense of desperation to make them understand feels like my own, and I imagine I am not alone in that. It comes to feel at times like, although we have learned their language and we are speaking to them in it, we are still speaking some other language with which they either choose not to or simply cannot understand. And, robbed of our own language, too, we are left speechless.

But Sayet is not speechless. In one of my favorite lines of the show, she says, “I realize the power that comes with showing people a different way of seeing the world.” Whatever limitations there may be in translation, wherever we may still feel out of balance, Where We Belong presents, in a voice fully and unapologetically Mohegan, a story with the power to reshape how audiences see the world.