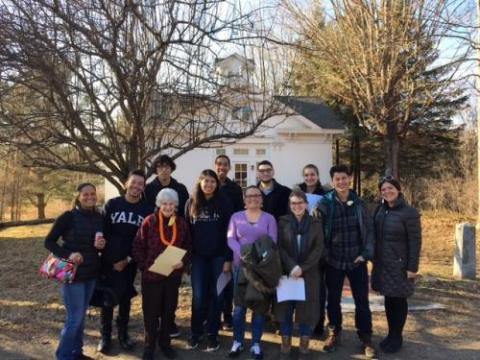 On January 21, 2017, the Yale Indigenous Performing Arts Program (YIPAP) made a special trip to Cornwall, Connecticut, to visit the site of a boarding school where indigenous children from Native Nations were educated from 1817-1827. The school, known as the Foreign Mission School, maintains several unique connections to the Native community at Yale, as well as the university as a whole.

Just this past summer, Ezra Stiles Head of College Steve Pitti served on the committee within the Department of Interior that placed the Foreign Mission School, and specifically the former home of the School’s Steward, on the National Historic Landmark list.  Two of the Foreign Mission School’s students in particular, Henry Ōpūkaha’ia and John Ridge, have very special connections to Yale University.

YIPAP, therefore, seeks to bring the stories and shared connections of these communities to life through the creation of a performance. To do so, students, artists, professors, and descendants of the boarding school’s students have joined together to listen, learn, and bring these stories to life, revealing their continued relevance to our lives and communities today. This summer, on June 17, 2017, the town of Cornwall has invited the descendants of the students who originally attended the school to return to Cornwall and celebrate the School’s placement on the NHL—as well as heal from the School’s complicated, and relevant, legacy. On June 17, YIPAP will present the performance the Yale Native students—and descendants of the students of the Foreign Mission School—create together in collaboration.

This past weekend marked the beginning of this important journey, as YIPAP traveled to Cornwall to visit the site of the boarding school, as well as the home of the School’s Steward.

The itinerary included many significant events and locations, including: (1) a visit to the home where Henry Ōpūkaha’ia passed in 1818; (2) a visit to the Cornwall Historical Society where students viewed actual letters and writings authored by the Native students who attended the Foreign Mission School; (3) a walking tour of the site of the school and the still-standing Steward’s House, now on the National Historic Landmark list; and (4) attendance at the Cornwall Historical Society, where students and descendants mixed and mingled with the descendants of the families who lived in Cornwall when the boarding school was in operation.

Several descendants and artists joined the Yale students and YIPAP on this one day journey, including Native Hawaiian playwright and performer Moses Goods. Upon returning to Yale’s campus, the students participated in an “acting workshop” where Goods led the students in several activities designed to engage everyone in collective, creative performance and expression.

Despite being nervous at first, I LOVED Moses’s workshop! I have no performing arts experience but his workshop was so liberating and I did feel more connected with the group just after one hour!- Vanessa Noelte (Mikmaq, MPH Candidate at Yale School of Public Health in Health Policy ‘17 and Native American Cultural Center Graduate Affiliate).

The Yale students were also accompanied by two of Henry Ōpūkaha’ia’s descendants, Deborah Lee (who repatriated Henry from Cornwall’s cemetery back home to Hawaii in 1992) and her niece Kauanoe Ho`omanawanui, who travelled all the way from Hawaii for the visit. The trip was all the more significant to the Yale Native community since Mary Kathryn Nagle, Executive Director of YIPAP, is a descendant of John Ridge of Cherokee Nation, and Kapi`olani A. Laronal, Assistant Director of the NACC, is descendant of Henry Ōpūkaha’ia.

This was an incredible and moving experience for me to be in the former resting place of Heneri Opukahai`a, my ancestor. It was a unique and once in a lifetime experience to also speak with the families of the Cornwall community and hear their own personal stories of the families who carry the common Yale names that we see and hear every day on the Yale campus. I’m looking forward to our trip to Hawaii so that we can get a sense of his life as a child and adolescent. Overall, this has been a powerful experience.Kapi`olani A. Laronal, M.A., Ed. Assistant Director, Native American Cultural Center (NACC) 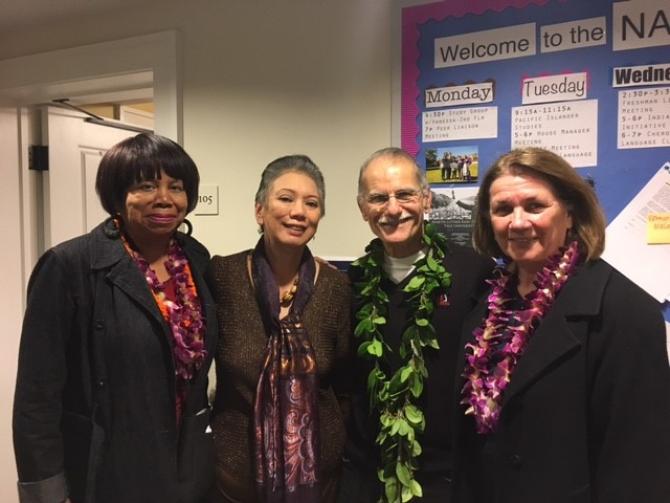 More about Henry Ōpūkaha’ia and John Ridge, and their Connection to Yale:

Heneri Opukaha’ia (Henry Obookiah), a Native Hawaiian, lost his family as a young boy in the midst of war during the late 1700’s under the rule of Kamehameha I (Kamakau,1992).

After being captured Opukahai`a lived for two years under the roof of the man who killed his family. His uncle, a kahuna, Hawaiian priest, convinced the captor to allow him to care for his nephew. For years following, Henry was trained to fulfill a kahuna role. However, after never finding solace in this practice Henry joined the Triumph trade ship ending up at Cornwall, Connecticut—after first arriving at Yale.

Former Yale President Timothy Dwight took Henry in and President Dwight’s relative, Edwin Dwight, educated and tutored Henry. In his new life away from home, Opukahai`a looked to the bible as a source of learning the English language. Overtime, he became a follower of Christian teachings and spirituality. 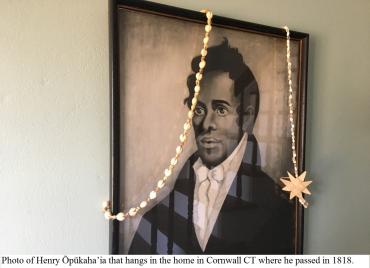 In 1817, Henry became a student of the Cornwall Mission School, the short-lived flagship of the American Foreign Mission movement. He died in February of 1818. He has become widely known in both Cornwall and Hawai`i as a pioneer of colonial pursuits toward ‘civilizing the savage’. Learning English and Hebrew, Henry translated texts and created Hawaiian grammar and spelling books and the workings of the first Hawaiian language dictionary.

He has since been celebrated in Kona, Hawai`i and Cornwall, Connecticut. In 2010, his iwi (bones) were returned home. He now rests at Kahikolu Church overlooking Kealakekua bay in Kailua-Kona, Hawaii. In 2018, Kahikolu Church will be holding a celebration marking 200 years of Opukahai`a’s legacy.

John Ridge (Skah-tle-loh-skee) and Elias Boudinot of the Cherokee Nation also attended the Foreign Mission School (Elias was John’s cousin, as their fathers were brothers). Like Opukahai`a, Elias Boudtinot became pioneers of the movement to spread Christianity to Native peoples. However, their rise in popularity still came at a cost for the American Board for Foreign Mission Schools. The marriage of John Ridge to Sarah Northrup, a white woman and daughter of the boarding school’s Steward, created widespread skepticism among proponents and sponsors of the school. Nonetheless, John Ridge and Elias Boudinot developed a reputation for the Cornwall school that was well-known and praised, yet short-lived. After leaving the school, John Ridge and Elias Boudinot returned to Cherokee Nation and assisted with the resistance against forced removal until 1832, when President Andrew Jackson refused to enforce the Supreme Court’s decision in Worcester v. Georgia. After 1832, both Ridge and Boudinot advocated that Cherokee Nation sign a removal treaty, and in December 1835, both signed the Treaty of New Echota. They were both assassinated by their fellow Cherokee on June 22, 1839. 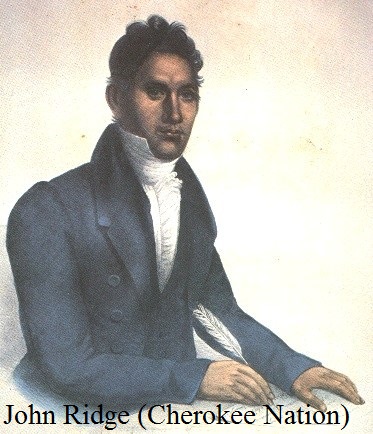 Saturday was an incredible experience for me, personally. John Ridge is my grandmother’s great-grandfather, and I grew up hearing the stories about how, when he married Sarah Bird Northrup, the town of Cornwall called him a savage, threw rocks at him, and threatened to kill him. My story’s family of Cornwall has always been traumatic. But when I returned, I encountered a town that welcomed me and our students from Yale, as well as Henry Obookiah’s descendants. The descendants of individuals who acted with violence and prejudice against my great-great-great grandfather embraced me and who I am, as a Ridge descendant. It was incredibly healing. The legacies of Indian boarding schools in this country carry with them a very troubled past. This school is no different. It is my hope that through our collective performance and storytelling, we can help to heal some of the wounds of our shared past.- Mary Kathryn Nagle, (Cherokee Nation) Executive Director of YIPAP

In March, YIPAP and the NACC will take ten Yale students to Hawaii to visit the site where Henry Obookiah is now buried, after his repatriation in 1992. The performance and celebration of the placement of the Foreign Mission School on the National Historic Landmark list will take place in Cornwall on June 17, 2017.

In March, YIPAP and the NACC will take ten Yale students to Hawaii to visit the site where Henry Obookiah is now buried, after his repatriation in 1992. The performance and celebration of the placement of the Foreign Mission School on the National Historic Landmark list will take place in Cornwall on June 17, 2017. 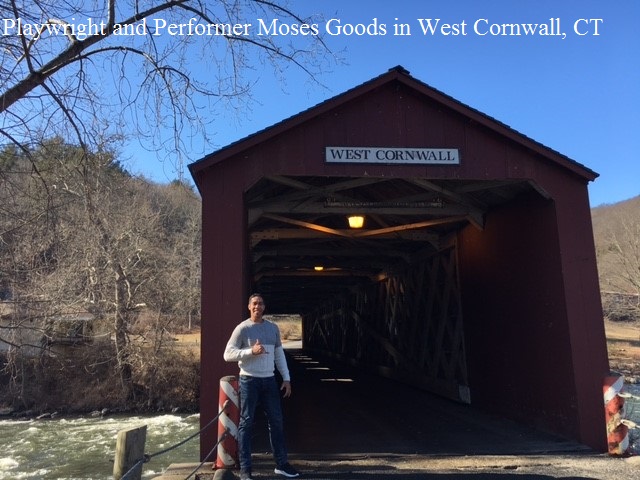