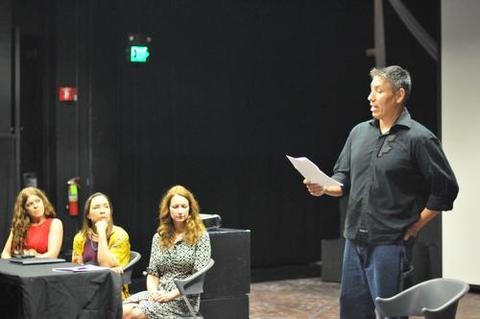 5-Minutes of History and 55-Minutes of Action: Building Engagement for American Indian Theater.

Dr. Myrton Running Wolf (Blackfeet/Wasco) received his Ph.D. in Theater and Performance Studies from Stanford University, his M.F.A. in film production from the University of Southern California, and his M.A. in Performance Studies from NYU-Tisch School of the Arts. Dr. Running Wolf began the symposium by presenting a compelling letter written to his mother, wherein he openly called into question many of the current cultural institutions who claim to produce performances of “Native identity”- as those performances are often based on nothing more than prejudice or stereotype, as opposed to authenticity generated by an actual Native writer. According to Dr. Running Wolf, “a couple of our Native experts say that real Indians don’t do Shakespeare; real Indians don’t fight. Real Indians don’t do hip-hop or musical theater or experimental theater or laugh. Some told me, ‘You don’t fuck with tradition especially on stage where white eyes are focused!’ Let’s be honest, there’s a right way and a wrong way to Play Indian, and Indians just don’t know how to do it.” That is, until non-Natives stop telling Natives how to be “Native,” authentic performances of Native identity in mainstream American culture will remain impossible.

Mary Kathryn Nagle (Cherokee Nation) is the Executive Director of the Yale Indigenous Performing Arts Program, a lawyer, and a playwright. Her plays have been produced by Amerinda (Miss Lead), Native Voices at the Autry (Fairly Traceable), Arena Stage (Sovereignty), and the Oregon Shakespeare Festival (Manahatta). Nagle spoke to the way in which the performance of Redface originated in the 1820s to support President Andrew Jackson’s Indian Removal Act, and explained how the continued performances of Redface today—coupled with the absence of actual Native voices on the American stage—perpetuates a legal framework in the United States that strips Tribal Nations of their inherent sovereignty to protect their citizens. According to Nagle, “Storytelling is powerful. It has the power to heal, to open hearts and minds—but it also has the power to dehumanize. As the election of President Jackson’s modern day predecessor demonstrates, perpetuating stories that dehumanize, in the end, undermines our collective humanity. And while some Americans are coming around to this realization, we have a long ways to go before the American theater—as well as the television and film industries—fully embrace the notion that dehumanizing Native Americans does not constitute “good” or even worthwhile storytelling.”

Dr. Courtney Elkin Mohler is Assistant Professor of Theatre in the Jordan College of the Arts at Butler University. Dr. Mohler directs for the department and teaches courses in Dramatic Literature, Theatre History and Performance Studies. Due to her lifelong obsession for making theater, she has acted in and directed over forty productions. Some of her recent directing credits include “What Would Crazy Horse Do?” by Larissa FastHorse, Michael Redhill’s “Goodness,” and “Burning Vision” by Marie Clements (SCU Fess Parker Studio Theater.) Bridging her research and artistic interests, she has worked closely with Project HOOP (Honoring our Origins and our Peoples through Native American Theater) and the professional Native American theatre company Native Voices at the Autry. According to Dr. Mohler, coalition casting is necessary to bring more the works of more Native playwrights to the American stage. “I do not, ever, advocate for color-blind casting,” explains Dr. Mohler. “But rather I utilize an approach Patricia Ybarra has called ‘coalitional casting,’ wherein student actors from other marginalized racial identities play roles outside of their own cultural background with respect and dignity. I do not cast white actors in Native roles, but instead look to my nonwhite students to help me tell Native stories because there are many experiences shared between other minoritized groups and Native people in America.”

Indeed, Patricia Ybarra writes that coalitional casting requires “not only an act of becoming a culturally different person, but an act of committing to the cause of telling a marginalized story; it is committing to doing the work it takes to get over one’s trepidation over telling someone else’s story. And it requires realizing that no single story is universal unless everyone’s story is.”[1]

Mohler argues that “contemporary Native artists committed to addressing issues of cultural identity, identity politics, blood quantum, white privilege and environmental activism may benefit from intentional casting with a range of phenotypes in ways that makes their plays producible for a variety of audiences. Such inclusive risk-taking would advance the perspectives of Native artists within the American theatrical repertoire. This endeavor should be pursued thoughtfully by culturally knowledgeable, capable directors in academic settings and only if no Native actors are available. And of course, it is paramount to producing any Native story to seek the advice and permission of the Native communities represented in the work or local to the region of the production.”

Dr. Christy Stanlake is a Professor at the United States Naval Academy, where she directs the university’s historic 111-year-old Navy Theatre program.  A proponent of theatrical praxis, Dr. Stanlake works as scholar and practitioner in the area of Theatre for Social Change; the majority of her publications concern Native American Theatre.  She authored Native American Drama:  A Critical Perspective (Cambridge UP, 2009), a book that analyzes points of connection between general theatrical discourses of space, language, and motion and Native epistemologies of land, orality, and transformation in order to offer culturally appropriate methodologies for reading, teaching, and viewing Native Theatre as well as to demonstrate Native Theatre’s potential for challenging and extending theoretical practices across the whole of theatre studies.  As a theatre director, Dr. Stanlake has applied theories of Native Theatre and performance to several shows, including the national, equity production of JudyLee Oliva’s Te Ata, which was produced by the Chickasaw Nation and toured to the Smithsonian’s National Museum of the American Indian in DC; and a USNA production of Lynn Riggs’s Green Grow the Lilacs that also toured to NMAI.  Dr. Stanlake outlined ideas and methodologies for the healthy collaborations between Native and non-Native theater artists that are necessary to bring more Native voices to the American stage. According to Dr. Stanlake, “collaborations between Native and non-Native theatre artists must honor the overlapping circles of aesthetics, political action, and spirituality that shape Native works of art.  Such collaborations must acknowledge that to stage a Native play is more than just ‘doing’ Native theatre in the way a theatre company might ‘do’ Shakespeare, or ‘do’ Beckett.  Healthy collaborations are not transactional; they are relational. They produce Native Theatre: from the beginnings of script analysis through the closing of the performance, healthy collaborations rely upon Native intellectual traditions and organizational structures in order to create transformative plays that enact Native sovereignty. As such, collaborations that produce Native Theatre require a substantial amount of time, discussion, openness, and vulnerability; much more so, I believe, than the regular business-driven models of most hierarchically structured theater companies.”

The symposium was organized and hosted by Stanford TAPS Department, which is committed to excellence in creative and scholarly work, and to promoting diversity, fairness, and accountability in American theater.