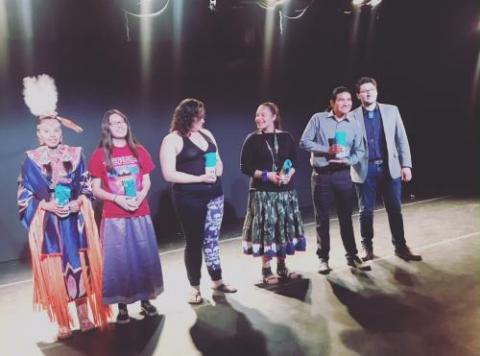 (Yale University, New Haven, CT) This year’s Third Annual Yale Indigenous Performing Arts Program’s (“YIPAP”) Young Native Storyteller Festival was a resounding success full of laughter, tears, applause, and an appreciation for the incredible wealth of talent our youth in Indian country possess. The three-day festival held at Yale University in New Haven, Connecticut, was the culmination of a national contest that accepted applications from young Native playwrights, dancers, poets, and musicians. On Saturday, May 5, students, faculty, and community members packed into the Off-Broadway Theater at Yale University to witness the performances of this year’s winners.

“I knew the winners of this year’s contest were talented, but I was not prepared for the power each of their performances until I witnessed them in person on May 5,” stated Mary Kathryn Nagle, YIPAP’s Executive Director.

The evening began with Teanna Hart (Sicangu Lakota) who read her poem titled “Visit to the Wounded Knee Massacre Site,” a poem that unpacks the history of Wounded Knee and the continued survival of her people. YIPAP Associate Director, Reed Bobroff reflected on the piece, “Teanna’s poem captures moments of the Wounded Knee Massacre that continue to live at the memorial that she feels at the site. Though the space is so shrouded in pain, Teanna recognizes that her life is a triumph over the genocide and she carries these ancestors with her as she continues to exist, resist, and flourish.” The Judges who selected Teanna as a finalist all agreed she is a gifted writer with a very bright future in any form of creative expression she chooses to pursue. 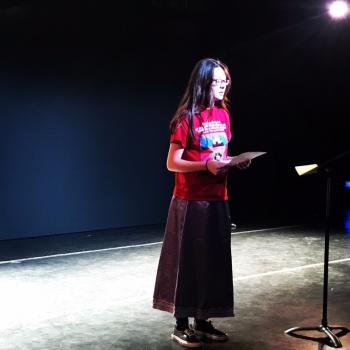 Next, the audience witnessed a musical performance by Vonica LaPlante, who played two songs on her saxophone, titled “Grand Entry” (an original composition) and “The Swan.” Winning this award is just the latest in a string of awards bestowed upon Vonica, including recent awards in music (chorus, band and saxophone), as well as speech and drama competitions. Vonica was recently named one of the United National Indian Tribal Youth’s 25 under 25 leaders. “Vonica is an incredibly accomplished young woman,” stated Nagle. “Everyone here at Yale is watching to see where she goes next. We know she will do great, important work with her amazing talents.” 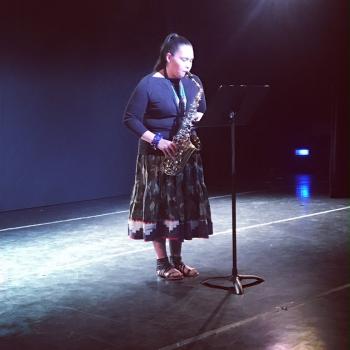 The audience then listened as Zooey White (Ogalala Lakota) performed her poem “When the Cop Aimed at Me,” a powerful poem that reveals the personal realities of the continued police violence that Natives continue to face, and survive, today in the United States. “It was amazing to see how Zooey’s presence affected the performance of her poem; her delivery, poise, and confidence brought her words to life on stage,” commented Kelly Fayard, the Dean of the Native American Cultural Center at Yale (“NACC”). “While she was exploring the heavy topic of poverty and police violence and harassment in Native communities, the piece was beautifully written and beautifully performed. Policing in Native communities is not new, but Zooey brought a contemporary voice to this issue, including a much needed centering of indigenous experiences.” 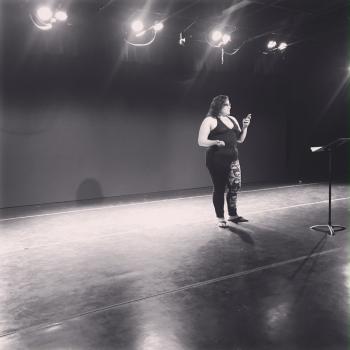 The student performances concluded with Charlize Arcoren (Sicangu Lakota), an incredibly talented dancer who performed the fancy shawl dance. Charlize was among the dancers who traveled from St. Francis Indian School to Cannonball, North Dakota, to dance for President Obama on June 13, 2014. “Charlize’s performance was beautiful and moving,” relayed Yale History Professor Ned Blackhawk. “It evoked the origins of the dance movement known as fancy shawl which has become among the most popular young women’s dance styles in Indian Country. What I found particularly interesting about her performance was her inclusion of a single drummer’s voice as opposed to a larger drum group. The beautiful simplicity of her dance in tandem with a single voice and drum reminded us how such dance possesses the deepest of origins as among this continent’s most enduring forms of creative expression.” 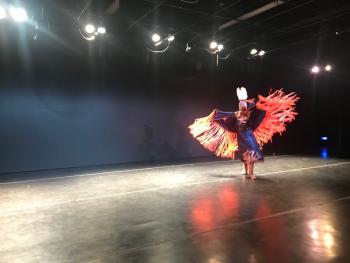 Last and far from least, the audience enjoyed a staged reading of the award-winning play The First Annual Meeting of the F.A.S. Support Group by Everett George (Fallon Paiute Shoshone Tribe). “Everett’s play truly packs a punch,” stated Nagle. “He tackles heavy issues related to alcohol and the trauma it has brought to our tribal communities. His play asks deep and important questions about who holds the responsibility for this trauma, questions that we must ask to truly bring about the healing our communities need.” Everett has displayed a true talent for playwriting, as dramaturg and director Jocelyn Clarke noted, “Everett storytelling is urgent and dramatic as it tackles challenging themes head on with wise-eyed intelligence and warm humor.” 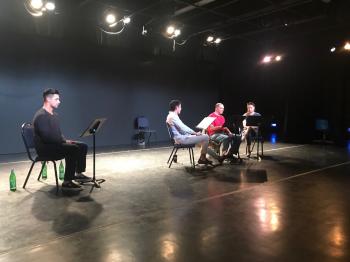 On Thursday, May 3, 2018, Jocelyn Clarke led a rehearsal and a staged reading of Reed’s play A Fraction of Love. “We were blessed to have another opportunity to workshop the Festival’s very first winner, A Fraction of Love, which won our inaugural contest in 2015,” stated Nagle. “It was wonderful to see his play continue to advance in its development, and we are all very excited to see where Reed will take it next.” A Fraction of Love follows the story of various Navajo Nation citizens as they face major life decisions regarding career and love in a world where these decisions determine whether their children will ultimately be citizens of their Nation. Director and dramaturg Jocelyn Clarke reflected that “Reed’s play offers complicated characters who promise to grow richer and deeper as he continues to develop it further.” 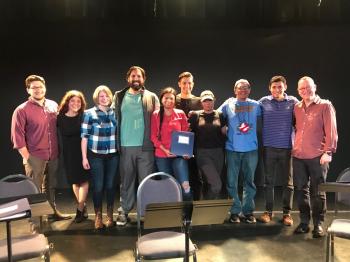 On Friday, May 4, 2018, Jocelyn Clarke led a rehearsal and a staged reading of Ryan’s new screenplay, I Hate You Jimmie Bacon Iron. “Ryan’s screenplay manages to be laugh-out-loud funny and deadly serious as events take wonderfully unexpected turns for the weird and strange – I can’t wait to see it on the big screen.” 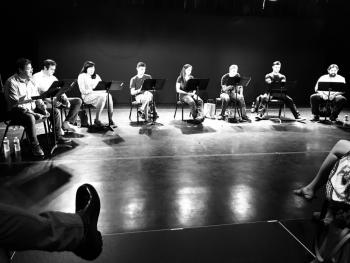 “Ryan’s screenplay is hilarious, fun, and poignant,” Nagle stated. “Through humor and wit, he deconstructs and examines white appropriation of Osage culture through the eyes of an un-assuming Osage hero, Jimmie Bacon Iron. At a time when white America is just beginning to wake up to the horror that is the historic and systemic appropriation of Native identity—and the simultaneous erasure of actual Native peoples and their Nations—his work is highly relevant and critical to the national dialogue.”

Many thanks to Greg Buzzard (YLS ’18) and Dean Kelly Fayard of the Native American Cultural Center; without their help the entire Festival would not have been possible. The Festival brought numerous (nearly twenty) Native artists from many corners of Turtle Island to Yale University for four days of intensive work on new Native theatrical and cinematic works, and this created many opportunities for Native artists to interact with Native students.

“Having so many indigenous actors, writers, and other performers on campus has been a joy for the Native community at Yale,” reflected Dean Fayard. “The Yale Indigenous Performing Arts Program has allowed our students to experience and learn so much about Native art and performance right here in our community. The Executive Director of YIPAP, Mary Kathryn Nagle, brings such an incredible energy and love of Indigenous performing arts that our students, and myself, find infectious—we can’t get enough of Indigenous performers, writers, and plays!  We, as a community, learn and grow from being present and having the privilege of experiencing this festival.  We look forward to seeing the ways in which this YIPAP festival influences Indigenous storytelling in the future—this festival is so important not just for our Yale community, but for Native storytelling writ large.” 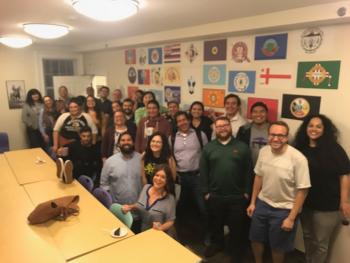 “I so thrilled by the growth and dynamism of YIPAP,” YIPAP Faculty Coordinator, Professor Ned Blackhawk relayed. “The festival has grown in leaps and bounds from our original contest in 2016, and it’s amazing to see so many new and experienced artists and dramatists coming to campus, working together, and enriching our Native American Cultural Center community. We’re so fortunate to be able to provide this collaboration between artists in Indian Country and our campus. Deep appreciations to all those who helped to make this year so successful with special thanks to Greg Buzzard (YLS ’18) and RITM Associate Director Erin Johnson for assisting so expertly with all the logistics.”

YIPAP will open up the submission process for the 2019 Yale Young Native Storyteller Festival in August 2018. At that time, information will be made available at YIPAP website.