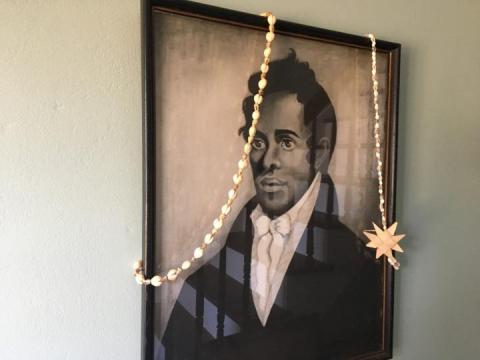 On January 21, 2017, the Yale Indigenous Performing Arts Program (YIPAP) made a special trip to Cornwall, Connecticut, to visit the site of a boarding school where indigenous children from Native Nations were educated from 1817-1827. The school, known as the Foreign Mission School, maintains several unique connections to the Native community at Yale, as well as the university as a whole.

Just this past summer, Ezra Stiles Head of College Steve Pitti served on the committee within the Department of Interior that placed the Foreign Mission School, and specifically the former home of the School’s Steward, on the National Historic Landmark list.  Two of the Foreign Mission School’s students in particular, Henry Ōpūkaha’ia and John Ridge, have very special connections to Yale University.

YIPAP, therefore, seeks to bring the stories and shared connections of these communities to life through the creation of a performance. To do so, students, artists, professors, and descendants of the boarding school’s students have joined together to listen, learn, and bring these stories to life, revealing their continued relevance to our lives and communities today. This summer, on June 17, 2017, the town of Cornwall has invited the descendants of the students who originally attended the school to return to Cornwall and celebrate the School’s placement on the NHL—as well as heal from the School’s complicated, and relevant, legacy. On June 17, YIPAP will present the performance the Yale Native students—and descendants of the students of the Foreign Mission School—create together in collaboration.

This past weekend marked the beginning of this important journey, as YIPAP traveled to Cornwall to visit the site of the boarding school, as well as the home of the School’s Steward.

The itinerary included many significant events and locations, including: (1) a visit to the home where Henry Ōpūkaha’ia passed in 1818; (2) a visit to the Cornwall Historical Society where students viewed actual letters and writings authored by the Native students who attended the Foreign Mission School; (3) a walking tour of the site of the school and the still-standing Steward’s House, now on the National Historic Landmark list; and (4) attendance at the Cornwall Historical Society, where students and descendants mixed and mingled with the descendants of the families who lived in Cornwall when the boarding school was in operation.

Several descendants and artists joined the Yale students and YIPAP on this one day journey, including Native Hawaiian playwright and performer Moses Goods. Upon returning to Yale’s campus, the students participated in an “acting workshop” where Goods led the students in several activities designed to engage everyone in collective, creative performance and expression.

On January 21, 2017, the Yale Indigenous Performing Arts Program (YIPAP) made a special trip to Cornwall, Connecticut, to visit the site of a boarding school where indigenous children from Native Nations were educated from 1817-1827.
http://yipap.yale.edu/news/yale-indigenous-performing-arts-travels-cornwall-conn...